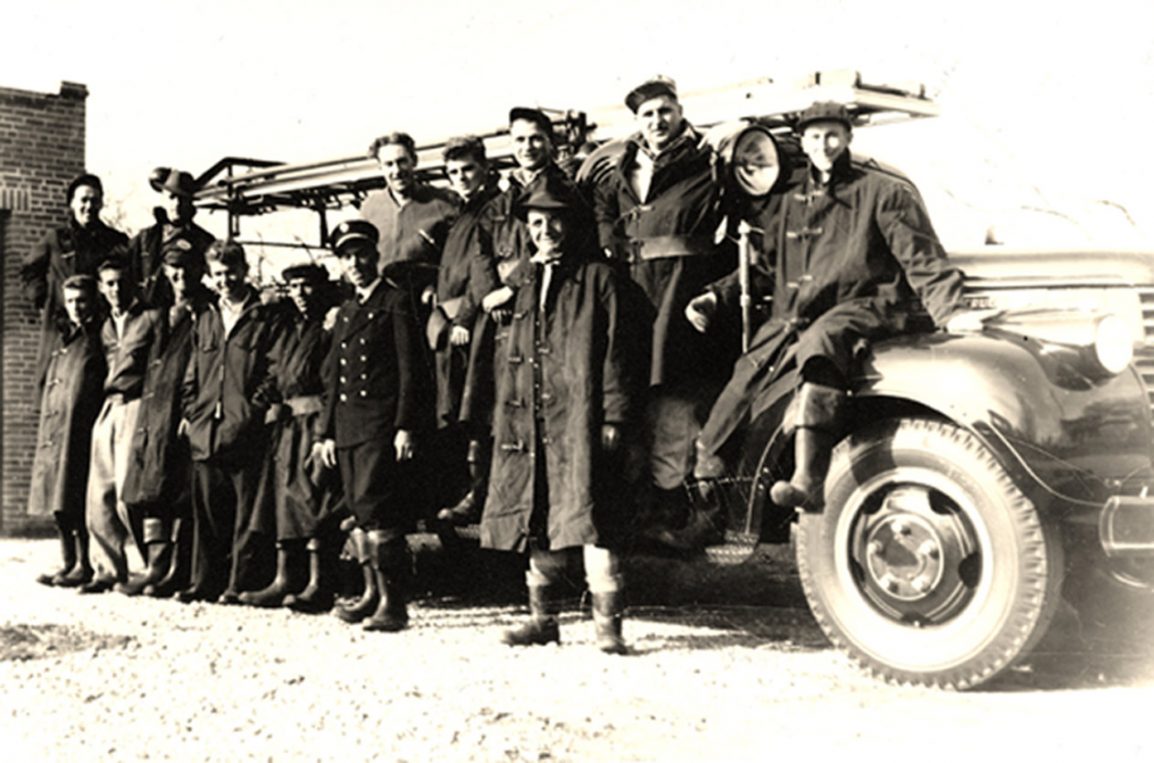 I received the following from David LaRochelle’s grandson (Scottie), who stumbled upon the Scarborough Retired Fire Fighters site and recalled good memories when he found pictures of his Grandfather and Father. He provided a little history to go with those photographs, which you can read below.

Stumbled onto this site tonight. And the memories came flooding back!
Saw your section with all the pictures, and noticed the 2 that adorn our walls, and have for years past.. and years to come.

I was disappointed that I could not leave a message directly under (attached to) the photos themselves. So I will write this in hopes that it will be seen/read by someone who remembers.
Your first picture is labeled 1946 LaFrance. When you pull up the photo, you can clearly see the man in the middle wearing a dress uniform and (dept) hat. That is my paternal grandfather David C. LaRochelle. A gentleman who fought in WWII and returned and became a firefighter, retiring as a Captain (not sure of years). It was always said that he was the first full-time firefighter in… West Hill?..

Further down the list is an iconic picture of a firefighter holding a young child. It is titled: Mr. LaRochelle. That would be my father, Jack R.D.J. LaRochelle. The picture is from the Plaza Hotel fire, it won many awards. The picture also makes the point that he worked for Toronto.. not Scarborough. But he/we lived in Scarborough and he loved the city. The family proudly tells others that we were born and raised there.

Yes, he truly loved being a firefighter. He turned down many Captaincies offered to him, because “I won’t get to drive the truck anymore”. He often told us that we could never tell anyone but, he would have done the job for free! Journalist Mark Bonokoski (Sun) did a story about “the picture”(20+ years later) as my dad was dying. He never found the young boy but was so touched by the story, he wrote a follow-up story upon dad’s passing. These 2 men are long gone. But their legacy continues. My brother Wayne has been retired from the Etobicoke dept for a while now, leaving just after amalgamation and just before getting to be a Captain. I have 4 (possibly 6) cousins who are or were firefighters.. and a Paramedic nephew.

As for me? I wrote and tested for North York in 1985. Passed all sections/tests.. until the doctor’s physical. He lifted my leg, gave a little twist, and said: “how many surgeries?”… I replied, “4” (from hockey). He looked me in the eye and said “sorry son”. Two weeks before I got married.. was a little hard enjoying my honeymoon..

Always wondered how my life would be different if the doctor wasn’t so on the ball.

Anyway, way too late to keep it short.. but THANK YOU for letting me see that these men and their pictures are not forgotten