Scarborough is the area which now forms the eastern part of the City of Toronto, Ontario, Canada. It was a separate city for over 200 years but has been part of the ‘East District’ of Toronto since 1998.

Pioneers of early Scarborough (population 3,821) realized that, without a carefully planned and trained fire fighting force, their township could be crippled or partially destroyed by fire, Therefore, in the 1850s, to assist in diminishing this danger; bucket brigades were organized and used to fight the fires. Volunteer brigades were established in 1922, to ensure a greater measure of improved fire fighting capability, the Borough undertook to erect a water tower and pumping station. Watermains and sewers were also laid in addition to hydrants being located in populated districts.

The first volunteer fire brigades were established for each of the communities of Kitchener Park, Regent’s Park, Courcelette, Scarborough Junction, Oakridge, Birchcliff and Birchcliff Heights. The fire apparatus used by these energetic and enthusiastic brigades was a very simple piece of equipment – a two wheeled hand-pulled cart complete with a hose reel. Attached to the long handle were buckets, axes and nozzles. The apparatus was housed in a small garage style fire station. The cart itself had to be pulled by the volunteers. A person discovering a fire would run to the station and use a hand-cranked siren to alert volunteers. When the volunteers arrived they would at times have to pull this cart along mud-laden roads and across fields. Often arriving at the fire to tired to effectively fight any fire. 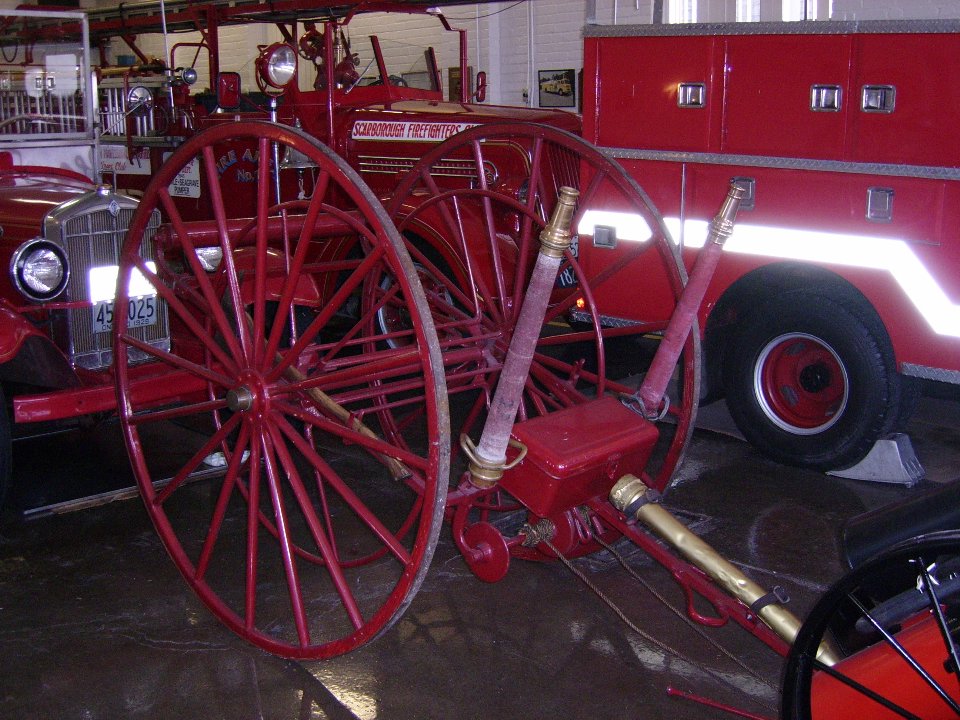 On November 2nd, 1925, the first full-time Fire Department was formed. Fire and Police Chief W.F. Scott, Deputy Chief Tom Love and First Lieutenant William Bath attended the official opening of the new fire hall, still in use today, located at the corner of

Birchmount Road and Highview Avenue. With the opening of this Fire Hall and the purchase of a 1925 Gotfredson fire truck, these three men were the beginning of our present Fire Department.

Upon the death of Chief Scott on March 18, 1926, Deputy Chief Tom Love, who for many years gave his time and efforts with the Oakridge Volunteers was appointed Fire Chief and remained in this position until his retirement in January 1956. Under Chief Love’s capable leadership further advances were made to enhance the Department’s fire fighting capabilities. The addition of four new men brought the permanent staff to 7 and a second fire truck, a 1930 Rugby, was purchased on December 30, 1930. Aided by volunteers this small department was effective in quenching many ablaze in the southwest area of the township, but no effective protection was available for the rest of the township who were far beyond the reach of water mains and the Birchmount hall. 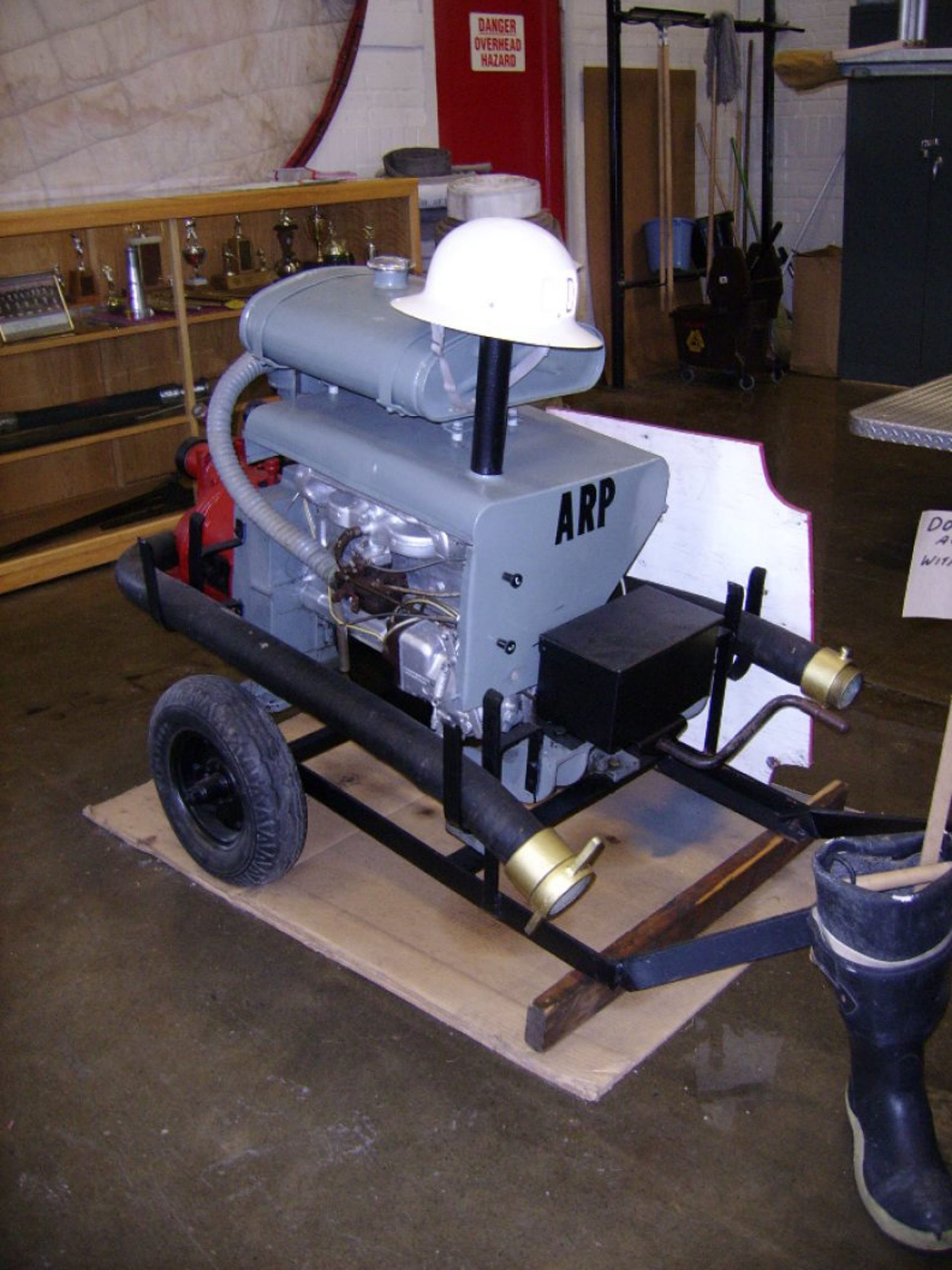 In 1943, the Canadian government turned over to the Township two used A.R.P. (portable) pumpers
which were placed into service in the West Hill and Agincourt communities.
As a result, these two communities formed their own volunteer Fire Brigades under the direction of Fire Chief Tom Love.

In July of 1945 after a two year campaign by the local Ratepayers Fire Committee – led by Mr. Carl Walker – the citizens of the West Hill and Highland Creek area voted to spend $10,000.00 to build and equip a new fire hall, which would be identified as Hall #2. Land was aquired on Morish Road , Highland Creek, and a new fire hall number 2 was completed in 1946. A Volunteer Brigade of fifteen members was organized with Villiers Durnford as Chairman. For several years the volunteers were valiant in subduing the occasional house or barn fire and using brooms to sweep out the many grass fires which swept over the many vacant lots and fields every spring. In May 1955, the West Hill Highland Creek Volunteer Fire Brigade was terminated and Hall 2 was fully manned with permanent fire fighter.

Inquiry into the 1943 Falcon Inn Fire

During the Second World War, the General Electric Company built a huge munitions factory on Warden Avenue in an area bordered by Birchmount Road, the south side of Eglinton Avenue, and Hymus Road. To protect the project they maintained there own fire fighting force. In December 1951 when General Engineering closed the plant, Scarborough hired the firefighters and placed them on the permanent Fire Department. The building boom, which developed after the war and caused water mains to be extended made it possible to give better protection with full-time professional firemen and modern equipment. Number 3 Fire Hall was established at G.E. Co., Number 4 at Dorset and Kingston Roads; Number 5 on Midland Ave. in Agincourt; and Number 6 hall at Birchmount and Ellesmere Roads. In 1960 the G.E. Co. Fire Hall was replaced with a new hall three on Warden Ave. A seventh station was opened on Markham Road near the old village of Woburn site, which happened to be the geographical center of the township. This modern building would function as a fire hall and headquarters. In 1963 fire hall #8 was opened on Midland Ave. north of Lawrence Ave. This would see the Department grow to 204 firefighters with all the modern fire fighting, equipment, resuscitation and vehicles that could be had. Fire Prevention initiatives were carried out by uniformed personnel who would bring possible hazards to the attention of homeowners. As well prevention was conducted amongst schools, Boy Scouts and Girl Guides through the showing of films and fire hall tours. Scarborough continued to see rapid growth and evolved from a Township to a Borough, to a City, and by 1998 saw a population of 550,000 and covered an area of some 72 sq. mi. The Fire Department had grown from those first seven to a high of 504, however, by 1998 there were 478 full time paid professional fire service employees located in 15 Fire Stations, training, mechanical, fire prevention and administration offices. The present-day complement consisted of 15 Pumpers, 5 Aerials, 2 Heavy Rescues, 1 Command vehicle, 1 Support vehicle. This growth was under five different Fire Chiefs who were; Thomas Love, 1925 – 1956; George Collins, 1956-1968; Dave Forgie, 1968 – 1976, William Wreatham, 1976-1987, Thomas Powell 1987 – 1998.

When Chief Wreatham retired the City conducted a search for his replacement and hired Fire Chief Thomas Powell. Chief Powell came to the Scarborough Fire Department from Fredricton, New Brunswick where he was the Fire Chief. He remained as Chief until January 1, 1998, when the Provincial Government through legislation forced an Amalgamation of the six Municipalities which comprised Metropolitan Toronto. Today the six amalgamated municipalities (East York, Etobicoke, North York, Scarborough, Toronto, and York) make up the new City of Toronto. The new Toronto Fire Services is headed by Fire Chief Alan Speed, who was the Chief of the former City of North York, with Chief Powell as one of four Deputy Chiefs.